I know it defeats the purpose of art by doing so, but I love rating and ranking movies. It’s the inevitable post-list debates that excite me most. It provokes people to talk and coerce and yell, it also forces people to reevaluate movies they may have once loved or loathed.

That being said, we’re almost in July and plenty of great films have already washed up onto the shores of what seems to be yet another strong year. (I don’t know why I mention 2015’s muscle when almost every year—as far back as I can remember—has been a strong year; at this point, the output of movies is so high that it’s virtually impossible to have a “bad year”). Of course, this list is subject to change with time. Although, the two movies I have on top aren’t movies known for playing well with others so it’s possible that—through sheer obstinacy—they will remain there.

Other than that, I think I’ve prefaced this list enough. There’s not much else to know other than the fact that I’m a fickle beast, as we all are, so please forgive me if this list lacks any and all resemblance to my year end top ten.

Not necessarily the most frightening horror movie you’ll ever see, but certainly one of the most thoughtful. It’s a movie that, upon leaving the theater, barely resonated with me. I though the skill set was self-evident, the acting and cinematography top notch, but the frights left me wanting more. But then, as days went by—hell: hours!—the movie crawled its way back into my thoughts. An insidious presence. Key images kept cropping up in my head, none more ghastly than the image of the film’s indefinable monster’s first victim. With choice framing, a little suggestive angling, the image automatically raises the stakes for our heroine (Maika Monroe) and her friends. A surefooted film that won’t quit following me around.

This move is a singular experience. It’s not only that the film plays in silence, but it’s a silence of its own ilk. It doesn’t have the scratchy old-timey quality of an older film, the snow and static of an actual silent picture, like Sunset orModern Times or any Edison attraction of the early-20th century, the din of civilization is still there, and yet, for some reason—(well…for a very obvious reason, seeing that the film is about a school of deaf Ukrainian kids relegated to society’s forgotten fringe)—the experience is different. Technology wasn’t sophisticated enough to marry pictures with sound in the beginning of the 20th-century. So our ears were prepared for the silence. It was expected. Now, about a hundred years later, movies are all sound, unless they’re paying homage to that bygone era, like The Artist. I walked out of the theater frightened of sound, of the dangers it might bring with it, its pollution. I was afraid of hearing the chirp!chirp! of a passing basic bitch trying to figure out what his or her dinner plans would be.

I think what was so horrifying was the unaddressed violence, the animal volatility. The film is relentless with big action, loud action. But it falls on deaf ears. People die feet away from one another, but no one comments on it because they can’t hear, and because they were asleep. Imagine that: your friend’s head: bashed in with a nightstand not five feet away from you, and you can’t hear a single moment of it.

What grabbed me the most were the performances. Especially Kristen Stewart. Stewart’s one of those actresses that people have trouble disassociating from her off-screen baggage. She does good work, more often than people realize, and yet people enjoy tearing her apart for decisions that don’t concern them: who she sleeps with, how she parties, what she does with her life. It’s great seeing her play a character unblemished by the lime light. She’s the no-name here, the lightning rod for the calamitous war raging between youth and age, between Maria Enders (Juliette Binoche) and Jo-Ann Ellis (Chloe Grace Moretz). Stewart brilliantly underplays the reserved, post-ironic Valentine, who’s frazzled from the get-go handling her boss’s myriad of smart phones, phone calls, emails, messages, etc. We watch her as she grows less and less comfortable in her skin, as she gradually crumples under the weight of dealing with an actress, Enders, who’s spooked by her own age. Stewart’s Valentine pumps a vital life force into this movie. She is the heart. And because of it, the movie suffers—just a bit—when she disappears, like sun-kissed vapor. 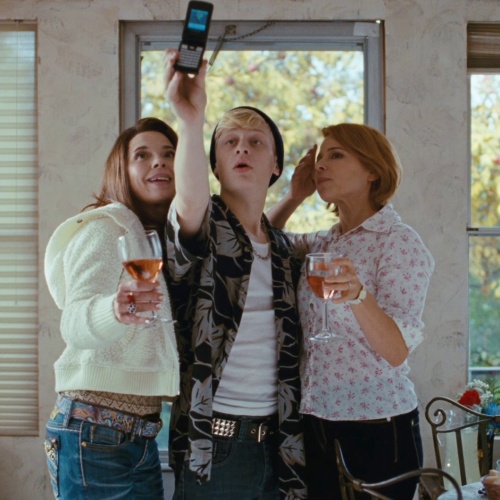 I’ve never seen such an intimate character study so frenetic in its desperation to claw its way out of its own frame, literally and figuratively. This movie bursts with life, with verve, with color and vibrancy and unapologetic emotion. Why opt for 3D when you can see something as propulsive, as wonderfully abrasive as French Canadian wunderkind Xavier Dolan’s 1:1 framed story of a single mother struggling and fighting as hard as she can to contain the one she loves: her berserker son? The movie strikes out with primeval frustration that’s deftly balanced with small and specific moments of familial bliss, like an unforced dance in the kitchen between our three leads. No one’s safe from their baser side here, no one’s excluded from dimension, from all fifty shades of gray. People make mistakes, they do right, they play the villain, they roll supreme as the hero, they vacillate, and they hate themselves for it. They hurt because they love, they hurt because they can’t control that love and who it’s directed towards. They hurt because people hurt. That’s just what they do.

A lot has been said about this movie. How Max and Furiosa’s journey 180s pointlessly, how it’s not as feminist as Miller seems to think it is, how Tom Hardy has been marginalized as a performer, how chauvinists the world over have deemed it as reprehensible propaganda out to strip men of their might. To beat your brain over such inconsequential nonsense is to totally miss the point. This is pure cinema. It’s movies like this that argue most convincingly for the continued life of movie theaters. If everything was as feeble and uninspired asJurassic World and Michael Bay’s never ending Transformers series, then sure, I’d understand the call for world domination vis-à-vis Netflix. (Mind you: I will never be okay with movie theaters going the way of the dinosaur—realdinosaurs—but then again, I will never begrudge people for pointing at Bay and his lumbering idiot of a series when arguing for the dismantling of movie theaters). People need to let go of their pretensions, their blockbuster fatigue, and wake the fuck up. Because if they don’t, they’re going be too late to the party and discover Fury Road years down the line on a screen way too small. And that’s straight-up criminal. See it now, see it big. For this is a lovely day. The loveliest. Because Mad Max is still in theaters for everyone to rectify their sins with those (Miller) who they have wronged.

Some Honorable Mentions: The Kingsman: The Secret Service, Furious Seven, Cinderella, Tangerines, Far From the Madding Crowd, and Going Clear: Scientology and the Prison of Belief.