CHECK OUT OUR EPISODE ABOUT 1971

One of my least favorite clichés is the idea that “They don’t make movies like they used to”. This attitude not only makes the speaker sound tired and old but also is a huge disservice to the many outstanding filmmakers at work at basically anytime in the history of the medium if one chooses to look. My attitude is that we are always in debt to the music, books, movies, etc. that defined our youth and as we grow older and more sentimental about the past and have less time to develop new tastes, we naturally assume that all art from our respective generation must have been the greatest that ever existed or ever will. I was born in 1976 and came of age in the 1990s but I never felt completely in step with the tastes of my era. Naturally I loved the explosion of Indie and Foreign Film that took the world by storm at that time, but as I became obsessed with movies, I came to accept that nearly all of my favorite directors were long dead before the time that cinema seized control over my brain like a drug. Perhaps I’m drawn to amazing filmmakers whose filmographies are complete and able to be appraised at a glance whereas filmmakers working today could still rise or sink in my estimation depending upon work they might do in the future. What I do know is that in 1971 many of the greatest filmmakers who ever lived simultaneously released some of their best work. It is almost an embarrassingly incredible year of movies. At the time, most of my favorite directors in film history were still active or just getting started. I don’t know what was in the water or the air that year (probably drugs), but the films that came out of that period created a ripple effect that is felt to this very day. So without any real rhyme or reason to the order of these films I want to call attention to the essential films of 1971, some damn good runner-ups and a list of potentially amazing movies that I have yet to see. Naturally if you see something missing from my list, I would be indebted if you would let me know. 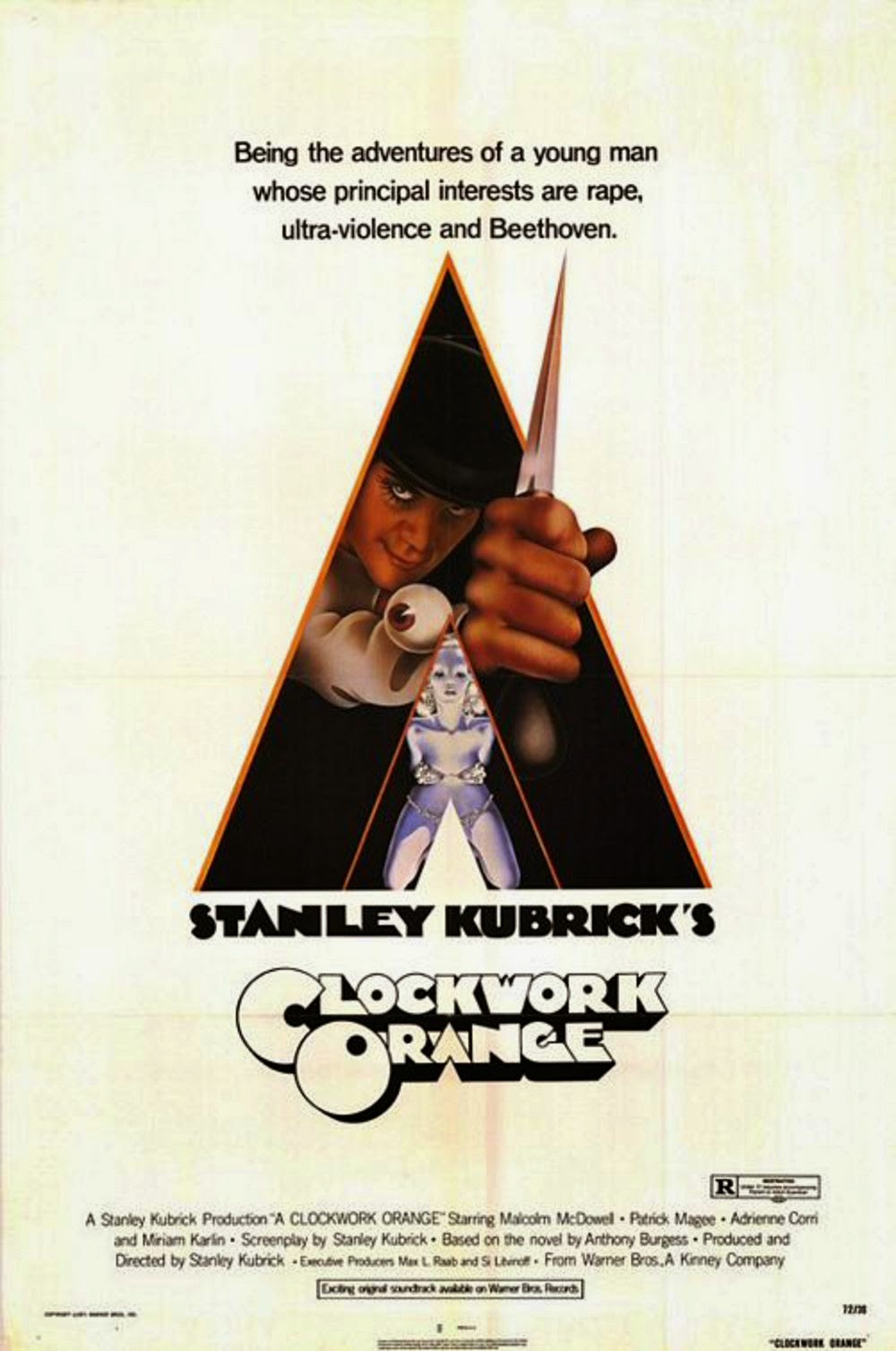 Based on the novel by Anthony Burgess, I discovered this movie on VHS at age 17 and spent most of my summer driving around listening to the soundtrack and trying to stare at myself in the rearview mirror making expressions that I thought resembled that of the central character Alex played by Malcolm McDowell. I foolishly left the cassette lying around unsupervised leading to my 5-year-old brother popping it into the VCR and getting an experience that he was not quite ready to have. In the years since, I have hungrily devoured all of the movies by Stanley Kubrick (except “Fear and Desire”) and consider him to be one of the towering giants of cinema. The eerie, hallucinatory power of this movie has never diminished for me.
McCabe & Mrs. Miller 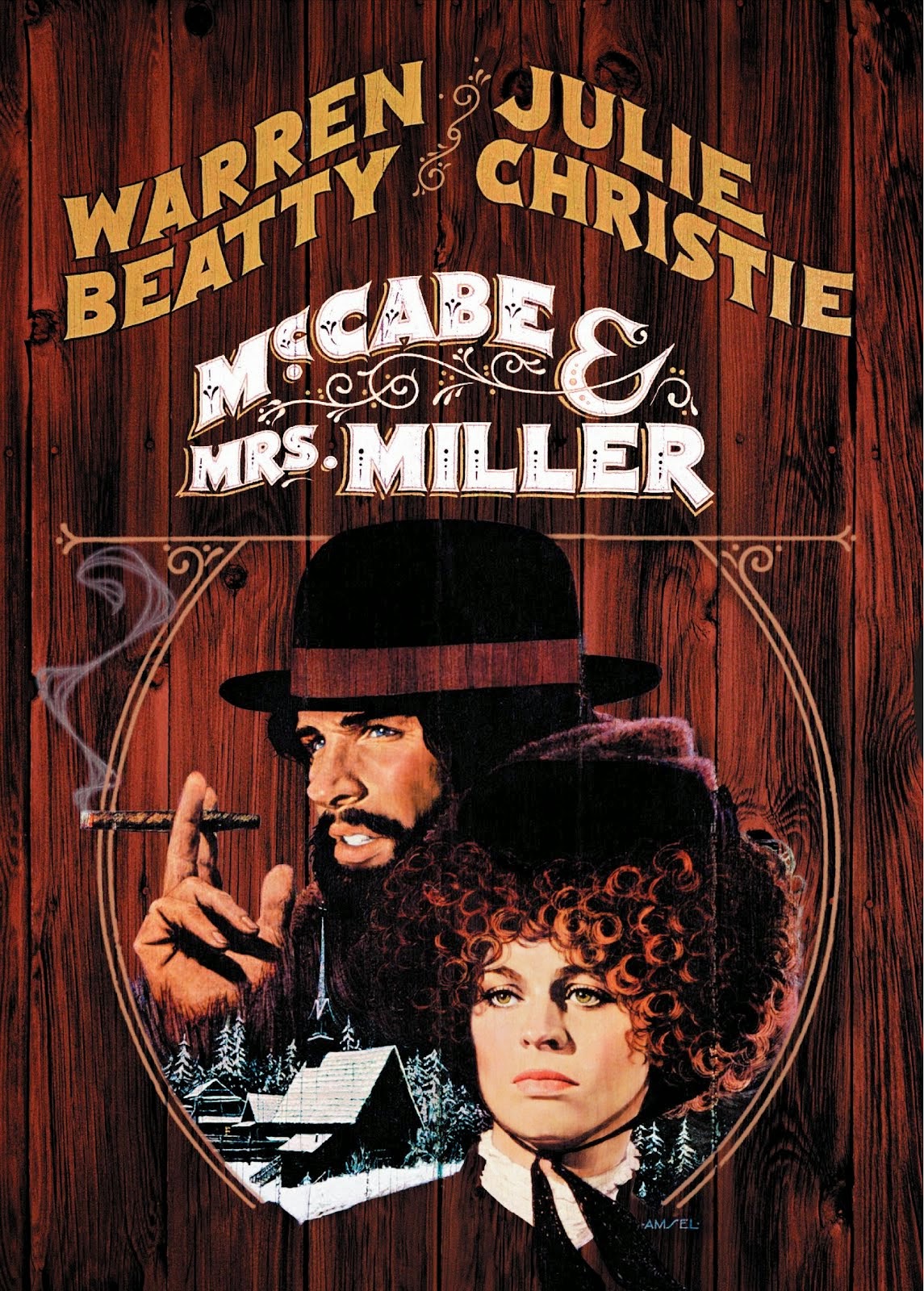 I was lucky enough to catch Robert Altman’s masterpiece, “McCabe & Mrs. Miller” at the New Beverly Theater in the summer of 1997 during my first internship in Los Angeles and from the moment I heard Leonard Cohen’s haunting score during the opening credits I was completely enchanted. The West has never looked or sounded like this before or since and Warren Beatty and Julie Christie turn in some of the finest performances of their careers.
Straw Dogs 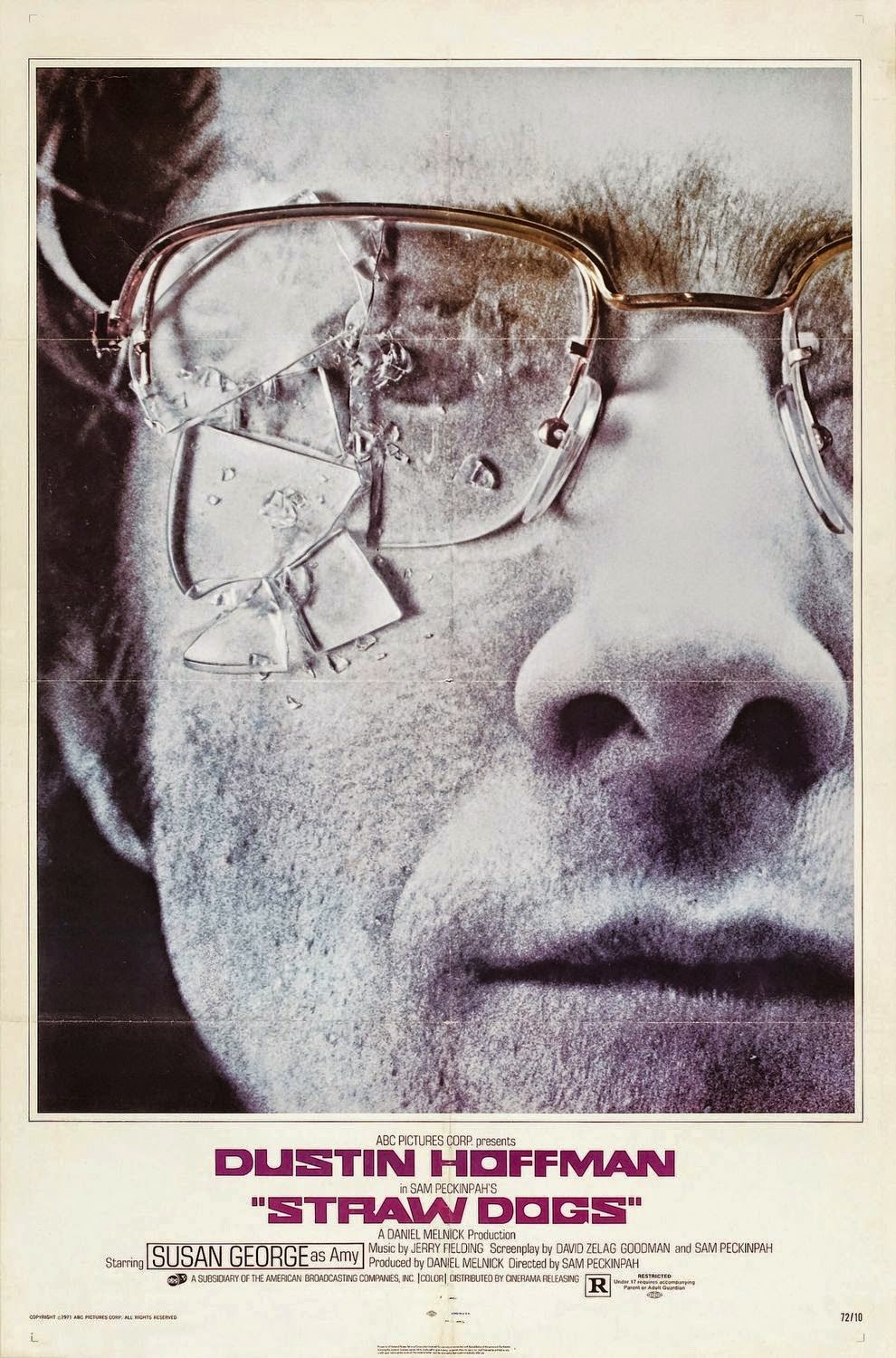 While Peckinpah might be better known for his extraordinary work in the Western genre, his film “Straw Dogs” remains one of the most powerful and controversial films of the 1970s. I can vividly remember sitting down to watch this with my friends in college with little to no knowledge of what the film was about and by the end of the evening we all agreed we had experienced something akin to a shared nightmare from which we would be unlikely to recover anytime soon. Ignore the horrendous watered-down remake from 2011 and rediscover why Peckinpah was such a lightning rod for controversy for most of his career.
Bananas 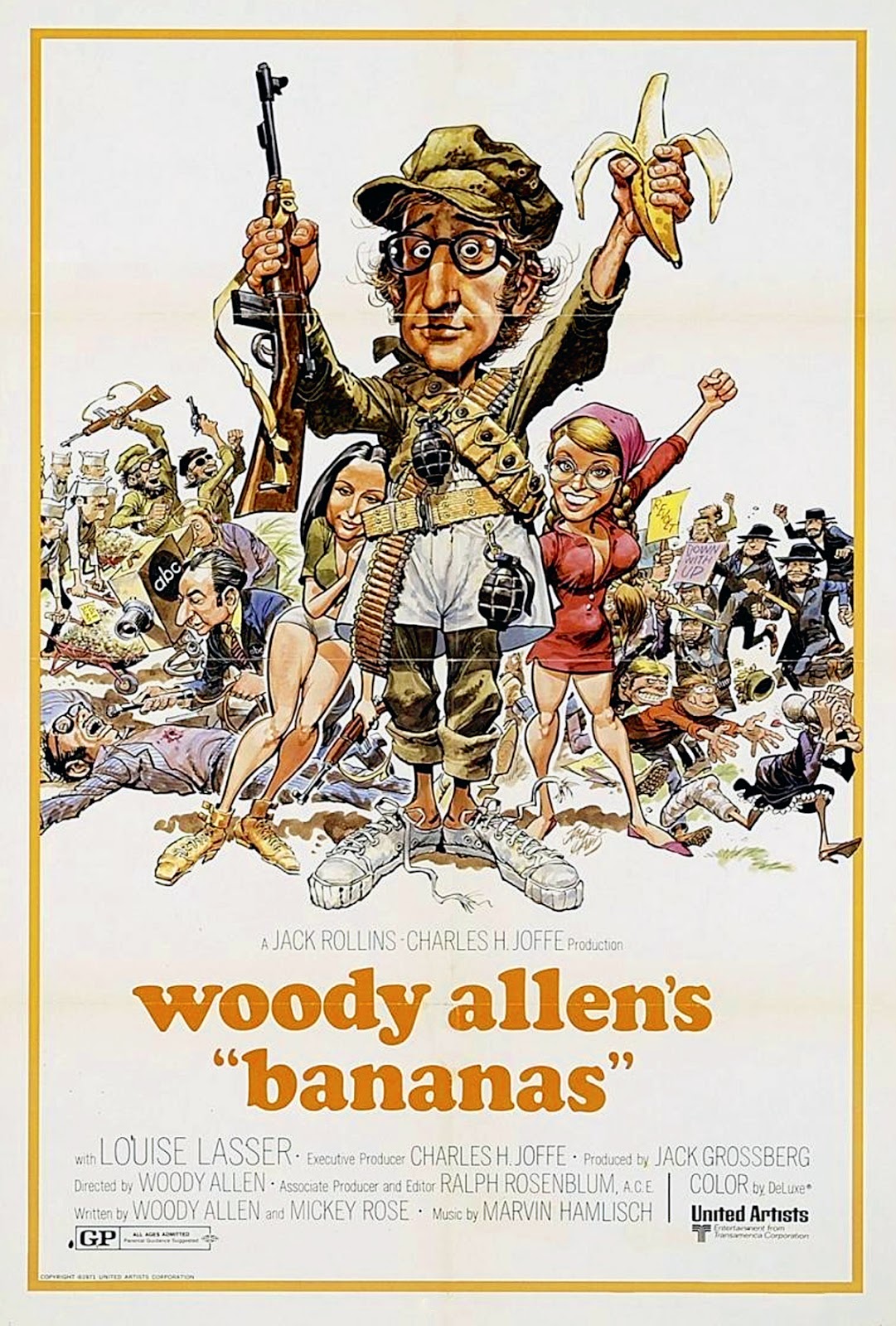 While most people think of the early 1970s as the heyday of anti-heroes and bleak dissections of established genres, Woody Allen used that period to carve out a reputation as one of the funniest men alive. In the years before films like “Annie Hall” (1977) and “Manhattan” (1979) transformed his reputation to that of a respectable filmmaker, Woody was cranking out hysterical gems like “Bananas” on a regular basis, movies that will seem almost unrecognizable today when compared to the latter part of his career. 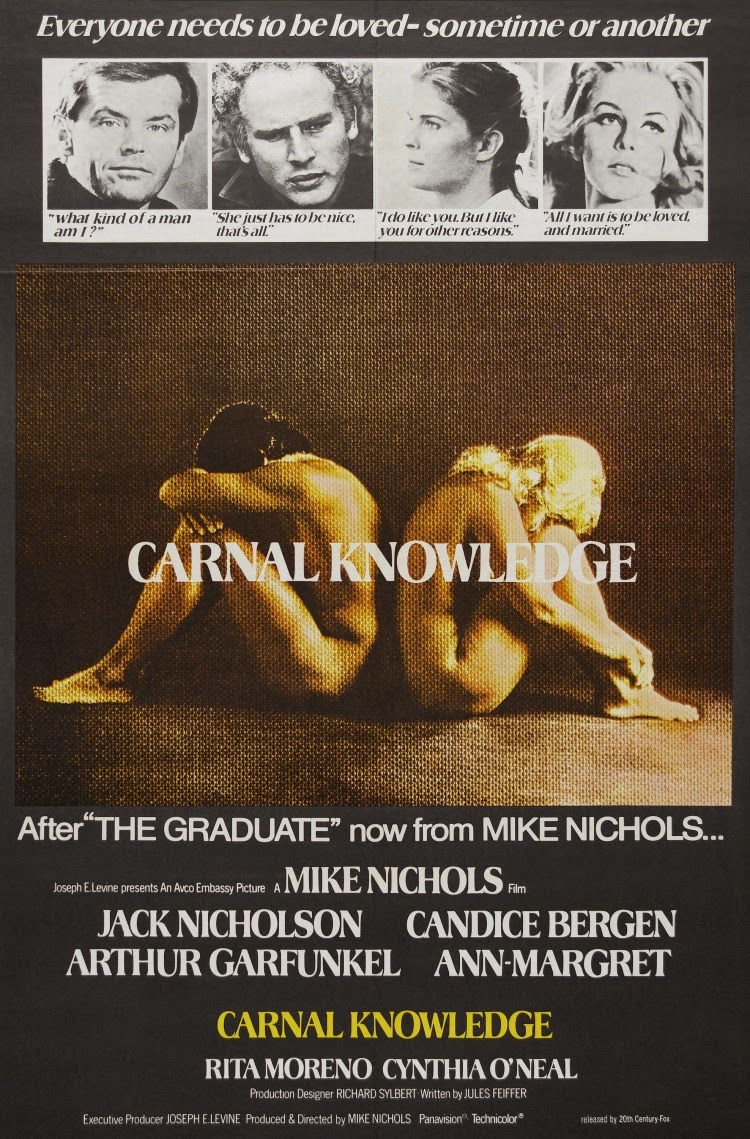 Better known today for films like “The Graduate” (1967) and “Who’s Afraid of Virginia Woolf? (1966), my personal favorite of Mike Nichols’ work is “Carnal Knowledge”. Some feel that this film is needlessly bleak about human relationships but I find the movie absolutely hysterical. The movie is completely unflinching in its depiction of the ups and downs of human relationships and Jack Nicholson and Ann-Margret were never better. 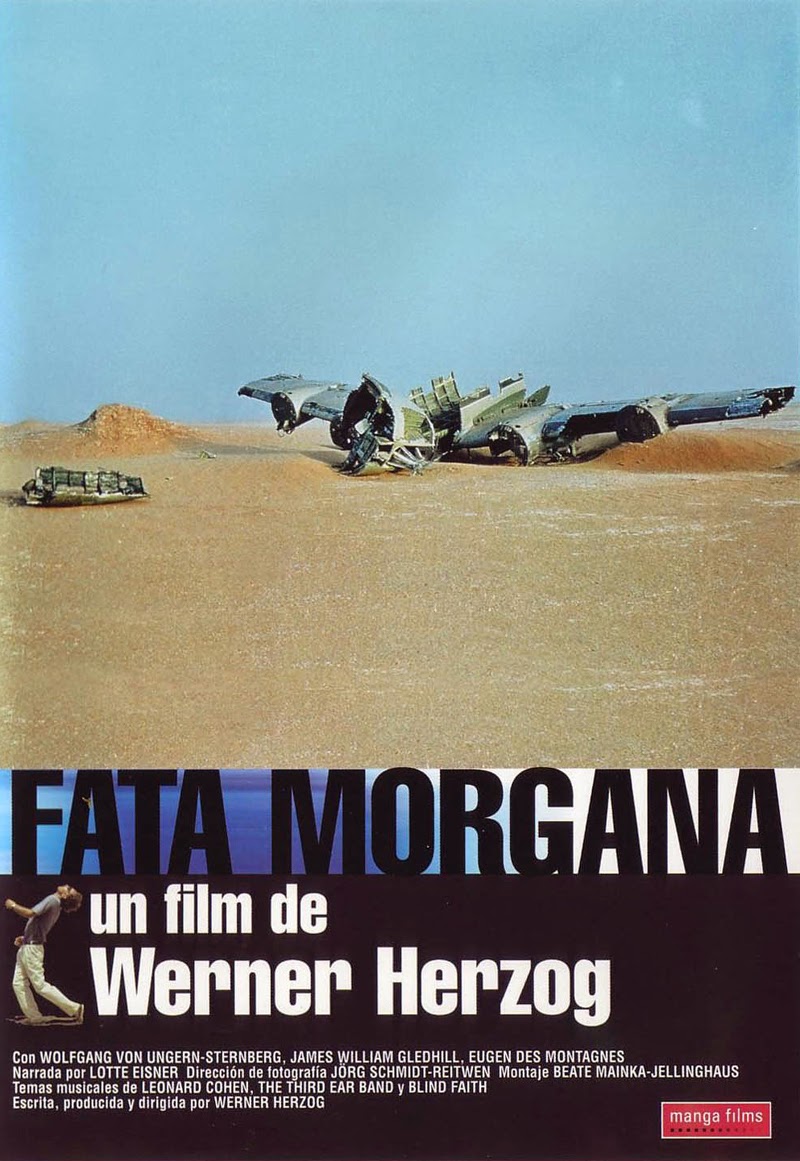 One of his least known films, “Fata Morgana” is almost criminally hard to find but is absolutely required viewing for any fan of his work. In the book “Werner Herzog – A Guide for the Perplexed” Werner Herzog describes in vivid detail the horrors he and his crew experienced in making this incredibly mysterious enigmatic work that defies easy categorization. Just thank your lucky stars you didn’t work on it and enjoy one of the best films of 1971.
The Devils 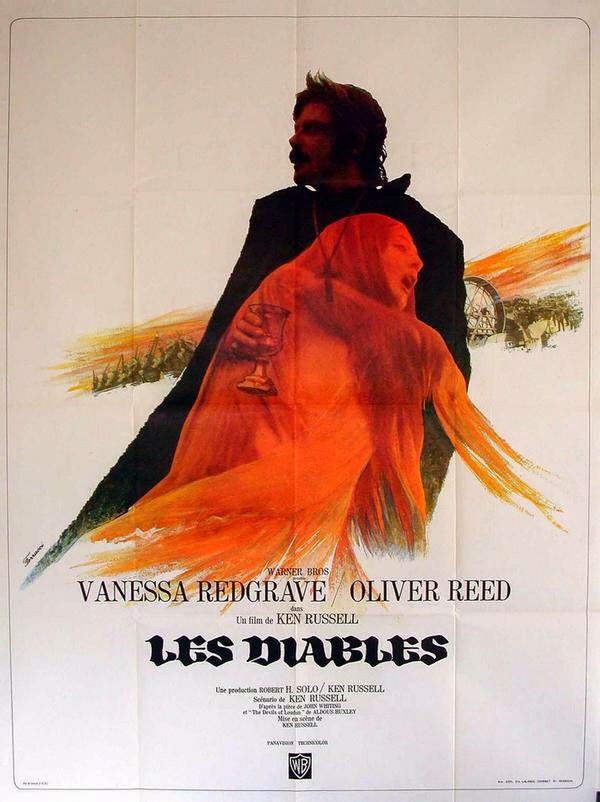 Film history is littered with movies that are supposedly controversial where the shocking content is exploited to lure audiences into the theater. “The Devils” is one of the few that is actually controversial, so much so that more than 40 years after its release Warner Bros still refuses to release the film in its uncut format in the United States. The story of Ken Russell’s struggles have been well documented in the documentary “Hell on Earth” (2002) and the book “Raising Hell: Ken Russell and the Unmaking of The Devils” by Richard Crouse so I won’t go into detail about the production here, but understand that this movie tackles religious hysteria, political corruption and the horrors mankind is capable of inflicting on itself better than any other film ever made. Not for the faint of heart and impossible to forget, I’m obsessed with this movie. 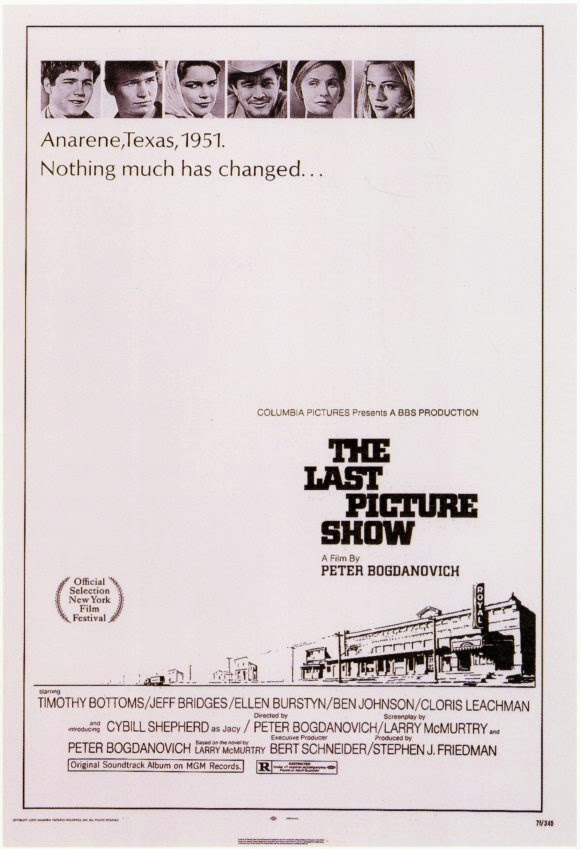 Larry McMurty’s “Lonesome Dove” is one of the greatest reading experiences I have ever had, but the movie that comes closest to capturing the spirit of McMurtry’s prose is Peter Bogdanovich’s “The Last Picture Show”. From the Hank Williams music crooning away throughout the film to the brilliant performances by the likes of Ben Johnson, Jeff Bridges, Cybill Shepherd, Cloris Leachman and Ellen Burstyn, this movie is arguably the best depiction of small town Southern life ever caught on film.

That list is drool-inducing to look at and once again I am floored by just how many of my favorite filmmakers were operating at the peak of the powers in 1971. Sadly Orson Welles did not make the list in that he was juggling several projects in that year but nothing was released and it wounds me that Howard Hawks had wrapped up his career the year before. If Hawks and Welles had managed to release movies that year, my head would likely just explode. The year also has so many more movies that are well worth hunting down including Jack Hill’s The Big Dollhouse, Mario Bava’s A Bay of Blood, Dario Argento’s The Cat o’ Nine Tails, Let’s Scare Jessica to Death, Willy Wonka & the Chocolate Factory, Hal Ashby’s Harold and Maude John Schlesinger’s Sunday Bloody Sunday, Shaft, Klute, George Lucas’ THX 1138, Clint Eastwood’s Play Misty For Me, William Friedkin’s The French Connection, Don Siegel’s Dirty Harry, Sweet Sweetback’s Baadasssss Song, Mike Hodges’ Get Carter, Monte Hellman’s Two-Lane Blacktop, Sergio Leone’s Duck, You Sucker!, Vittorio De Sica’s The Garden of the Finzi-Continis, The Hospital, Panic in Needle Park, The Omega Man, Le Mans, Roman Polanski’s Macbeth, Wake in Fright,Werner Herzog’s Land of Silence and Darkness, Dennis Hopper’s The Last Movie, & Diamonds are Forever.

I’m also fully aware that I left many films off this list because I am still working my way through this extraordinary treasure trove of cinema. I still need to see: Ingmar Bergman’s The Touch, Vanishing Point, Steven Spielberg’s Duel, The Abominable Dr. Phibes, Billy Jack, Nicolas Roeg’s Walkabout, Escape from the Planet of the Apes, Brian’s Song, Death in Venice, Fiddler on the Roof, Nicholas and Alexandra, 10 Rillington Place, Francois Truffaut’s Anne and Muriel, Mon Oncle Antoine, John Cassavetes’ Minnie and Moskowitz, And Now for Something Completely Different, and Bedknobs and Broomsticks. I apologize for any film that I missed in my overview and I’ll be the first to revise it if you have anything you would suggest that deserves to be included.

« ONE SHOT, ONE STORY: ECONOMY IN BENNETT MILLER’S FOXCATCHER ’71 – Review »